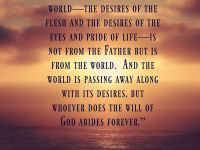 1. He who would be greatest in the kingdom of the Father’s spiritual brotherhood must become little in his own eyes and thus become the server of his brethren.

2. Spiritual greatness consists in an understanding love that is Godlike and not in an enjoyment of the exercise of material power for the exaltation of self; seek in your daily lives, not self-glorification, but the glory of God.

3. If you presume to exalt yourself before God, you will certainly be humbled; but whoso truly humbles himself will surely be exalted.

4. “Whosoever would become great in my Father’s kingdom shall become a minister to all; and whosoever would be first among you, let him become the server of his brethren; but when you are once truly received as citizens in the heavenly kingdom, you are no longer servants but sons; sons of the living God.

5. And so shall this kingdom progress in the world until it shall break down every barrier and bring all men to know my Father and believe in [this] saving truth.”

6. Make no distinctions among those who become believers in the gospel through your ministry; showing all men that God is no respecter of personals; that, in the sight of God and in the fellowship of the kingdom, all mortals are the children of God.

7. Strive not with the souls you win for the kingdom, do your utmost to promote peace and harmony among the various groups of sincere gospel believers.

8. Look upon human personalities in time and in eternity; learn that many souls can best be led to love the unseen God by being first taught to love their brethren whom they can see.

9. With energy and enthusiasm live up to the full measure of your human responsibilities and divine privileges in the kingdom of God; adhere to the higher and spiritual realities of the kingdom regardless of the outward appearance of all material manifestations.

10. If you would be first in the kingdom, seek to minister these good truths to your brethren in the flesh.

11.Though it may not fall to you to do the great works as seen by men, be content to be the teacher and counselor of those who do such things.

12. You are not to attack the old ways; you are skillfully to put the leaven of truth in the midst of the old beliefs.

13. But remember, there concerns the impossibility of teaching man about God if the man does not desire to know God; you cannot reveal God to those who do not seek for Him; you cannot lead unwilling souls into the joys of salvation.

14. Man must become hungry for truth as a result of the experiences of living, or he must desire to know God as the result of contact with the lives of those who are acquainted with the divine Father before another human being can act as the means of leading such a fellow mortal to the Father in heaven.

15. When in spirit and soul you have turned your backs upon the Father’s kingdom, it is useless in mind and body to stand before the door of the kingdom and knock, saying, “Lord, open to us; we would also be great in the kingdom;” they will not be received among those who have fought the good fight of faith and won the reward of unselfish service in the kingdom on earth.