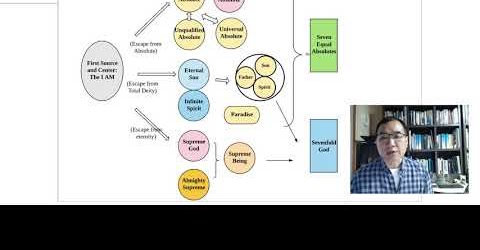 Total, infinite reality is existential in seven phases and as seven co-ordinate Absolutes:

1. The First Source and Center.

2. The Second Source and Center.

3. The Third Source and Center.

4. The Isle of Paradise.

God—the Universal Father—is the personality of the First Source and Center and as such maintains personal relations of infinite control over all co-ordinate and subordinate sources and centers. Such control is personal and infinite in potential, even though it may never actually function owing to the perfection of the function of such co-ordinate and subordinate sources and centers and personalities.

The First Source and Center

The First Source and Center is related to the universe as:

2. The mind forces are convergent in the Infinite Spirit; the differential and divergent cosmic mind in the Seven Master Spirits; the factualizing mind of the Supreme as a time-space experience in Majeston.

3. The universe spirit forces are convergent in the Eternal Son.

4. The unlimited capacity for deity action resides in the Deity Absolute.

5. The unlimited capacity for infinity response exists in the Unqualified Absolute.

6. The two Absolutes—Qualified and Unqualified—are co-ordinated and unified in and by the Universal Absolute.

REALITY, as comprehended by finite beings, is partial, relative, and shadowy. The maximum Deity reality fully comprehensible by evolutionary finite creatures is embraced within the Supreme Being. Nevertheless there are antecedent and eternal realities, superfinite realities, which are ancestral to this Supreme Deity of evolutionary time-space creatures. In attempting to portray the origin and nature of universal reality, we are forced to employ the technique of time-space reasoning in order to reach the level of the finite mind. Therefore must many of the simultaneous events of eternity be presented as sequential transactions.

As a time-space creature would view the origin and differentiation of Reality, the eternal and infinite I AM achieved Deity liberation from the fetters of unqualified infinity through the exercise of inherent and eternal free will, and this divorcement from unqualified infinity produced the first absolute divinity-tension. This tension of infinity differential is resolved by the Universal Absolute, which functions to unify and co-ordinate the dynamic infinity of Total Deity and the static infinity of the Unqualified Absolute.

In this original transaction the theoretical I AM achieved the realization of personality by becoming the Eternal Father of the Original Son simultaneously with becoming the Eternal Source of the Isle of Paradise. Coexistent with the differentiation of the Son from the Father, and in the presence of Paradise, there appeared the person of the Infinite Spirit and the central universe of Havona. With the appearance of coexistent personal Deity, the Eternal Son and the Infinite Spirit, the Father escaped, as a personality, from otherwise inevitable diffusion throughout the potential of Total Deity. Thenceforth it is only in Trinity association with his two Deity equals that the Father fills all Deity potential, while increasingly experiential Deity is being actualized on the divinity levels of Supremacy, Ultimacy, and Absoluteness.

The concept of the I AM is a philosophic concession which we make to the time-bound, space-fettered, finite mind of man, to the impossibility of creature comprehension of eternity existences—nonbeginning, nonending realities and relationships. To the time-space creature, all things must have a beginning save only the ONE UNCAUSED—the primeval cause of causes. Therefore do we conceptualize this philosophic value-level as the I AM, at the same time instructing all creatures that the Eternal Son and the Infinite Spirit are coeternal with the I AM; in other words, that there never was a time when the I AM was not the Father of the Son and, with him, of the Spirit.

The Infinite is used to denote the fullness—the finality—implied by the primacy of the First Source and Center. The theoretical I AM is a creature-philosophic extension of the “infinity of will,” but the Infinite is an actual value-level representing the eternity-intension of the true infinity of the absolute and unfettered free will of the Universal Father. This concept is sometimes designated the Father-Infinite.

Much of the confusion of all orders of beings, high and low, in their efforts to discover the Father-Infinite, is inherent in their limitations of comprehension. The absolute primacy of the Universal Father is not apparent on subinfinite levels; therefore is it probable that only the Eternal Son and the Infinite Spirit truly know the Father as an infinity; to all other personalities such a concept represents the exercise of faith.