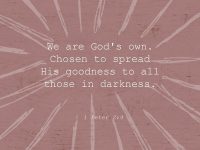 2. “Love is the rule of living within the kingdom – supreme devotion to God, while loving your neighbor as yourself.”

3. “Obedience to the will of the Father, yielding the fruits to the spirit in one’s personal life, is the law of the kingdom.”

5. “True, there is a King in this kingdom, and that King is my Father and your Father; [mortals] are indeed His loyal subjects, but far transcending truth that [we[ are His sons.”

7. Be not mindful of those things which foster your anxiety but rather at all times concern yourself only with doing the will of the Father who is in heaven.

8. “God is your Father, and religion – this gospel – is nothing more or less than the believing recognition of the truth that you are His [child].”

9. “When God’s will is your law, you are noble slave subjects; but when you believe in this new gospel of divine sonship, my Father’s will becomes your will, and you are elevated to the high position of free children of God, liberated sons of the kingdom.”

10. The idea of the kingdom, King, and subjects must now be substituted for the concept of the truth of the heavenly family, the heavenly Father, and the liberated sons and daughters of God engaged in joyful and voluntary service for their fellow humans and in the sublime and intelligent worship of God the Father.

12. The kingdom of heaven must begin with, and be centered in, the dual concept of the truth of the fatherhood of God and the correlated fact of the brotherhood of man.

13. “Kingdom” is the concept embraced in man’s personal experience in relation to his fellows on earth and the Father in heaven; it portrays the ideal of a resultant new order of human society.

14. The acceptance of such teaching liberates man from the age-long bondage of animal fear and at the same time to enrich human living.

15. This new gospel affirms that human salvation is the revelation of a far reaching divine purpose to be fulfilled and realized in the future destiny of the endless service of the salvaged sons of God

16. As the Father in heaven looks down upon men, they are all alike; standing in the brotherhood of kingdom, women stand equal with man; no longer can man presume to monopolize the ministry of religious service.

17. The kingdom is the brotherhood of God’s reign in the hearts of all human beings; God is a kind and compassionate Father who so loves all men that He would welcome them into this kingdom of heaven.